It seems like the week of the party flies by for Mommy but it DRAGS by for the kids! They were so excited ALL week for Tiana's party. We had to think hard to keep them occupied during those days. One of them Tiana asked to play with the tunnels. I was a bit hesitant because last time I had them out they terrified Camden. This time though he loved them! They played most of the day in them. 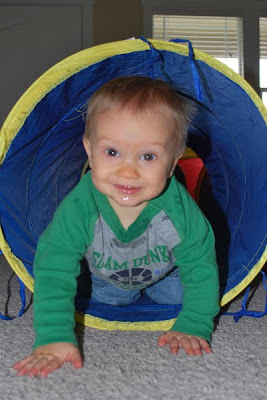 I finished my bag finally. I have been needing a smaller diaper bag but I have to much stuff still for a purse. I used the Amy Butler pattern that I used with Tiana's bag only the larger size. I love it! It is just the right size for this time in my life! 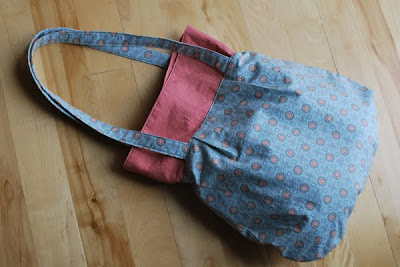 A detail of the fabric. I love this little print. I got enough to make Tiana a dress out of it later this summer. 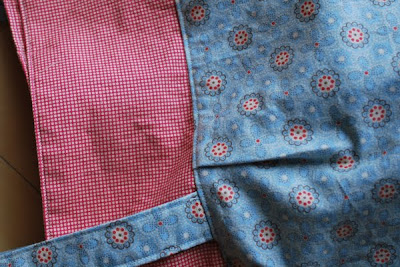 The other project I tackled last week was these butterflies for the party. I saw a tutorial online somewhere and headed out to get the supplies. They turned out so cute. I also made some dark brown ones for her room. I am planning on hanging them around her light fixture. I will post photos when I get it done. 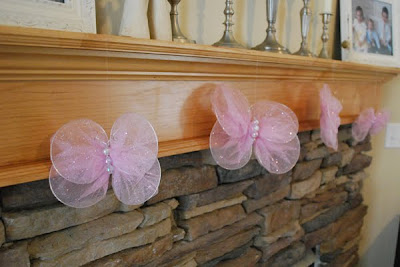 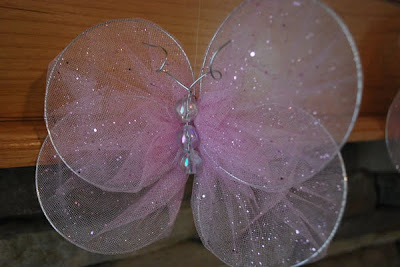 The cake and cupcakes!! 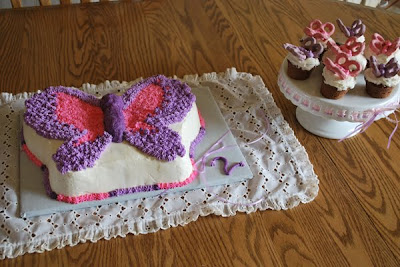 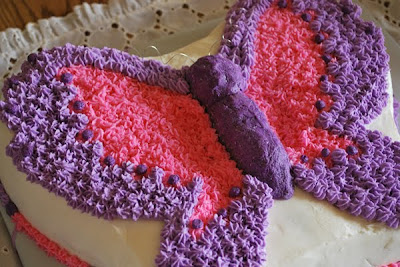 It was really pretty simple but I love the way it turned out. Plus I did everything myself this time! My mom has been here in the past to help me out making the frosting but this time it was all me!!!! 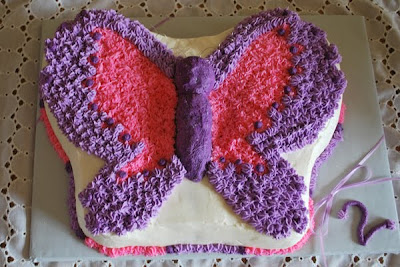 Right after Easter I was in Winco and they had these yogurt covered pretzels in the perfect colors. I had seen this idea somewhere only with regular pretzels which I wasn't too fond of. As soon as I saw them in pink and purple though, I knew it would be perfect! 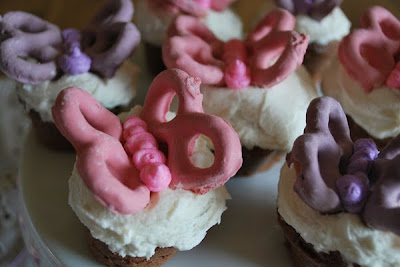 Our beautiful two year old with her "ubberbye" cakes! 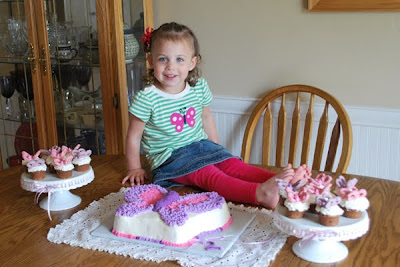 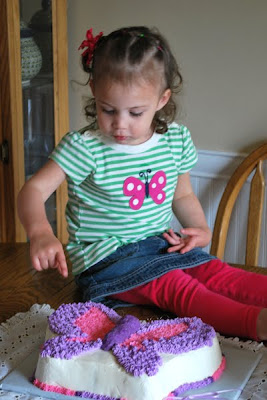 She loved them. It makes every hour spent making the cakes worth while when I get to see their faces light up when they see them for the first time! 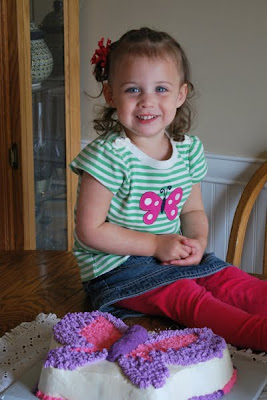 On Friday night we had a few families over with kids her age! She loved spending time with her little friends but wasn't too fond of all the parents they brought along! It made for quite the crowd which she doesn't do well with at times. It just so happened that for some reason (she has been waking up with nightmares which is a totally different topic) she only took a 20 minute nap which isn't good for her! She did enjoy herself and talked about the party afterward but did have a few meltdowns.... which I know is normal for a 2 year old.... and a girl! One of them came after she looked up and saw everyone looking at her while singing happy birthday!! But that one was not too bad because after all as soon as it was over she got to eat cake! 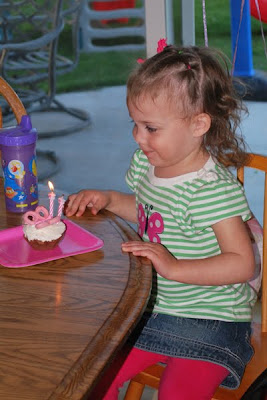 She blew out one candle before she looked up at the crowd and then she wanted Keaton to blow out the other one. This was progress though, last year she was terrified of candles! 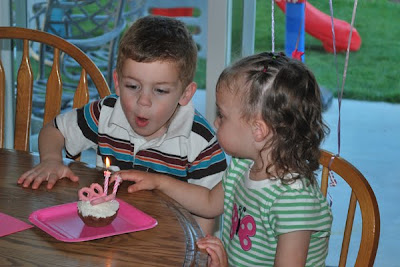 Attempting a group photo. Notice my little birthday girl crying! Too many people were looking at her! Oh well she had fun playing with the kids and she got some fun girly dress up things as well as a few other fun toys! 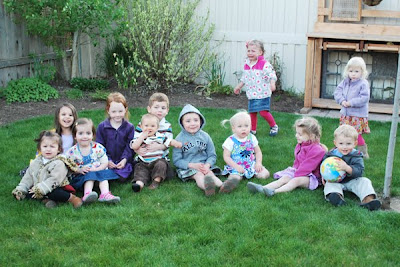 Saturday we had a party for family, which is quite a few people also. She did better with this one though because everyone was family. Auntie Kyla made her this adorable little apron! 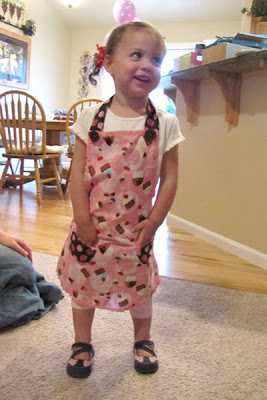 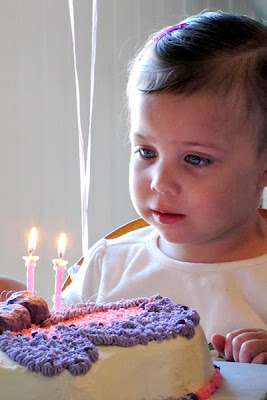 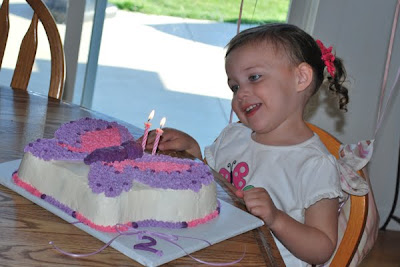 She still wanted help blowing out the candles, which of course Keaton was happy to help with! 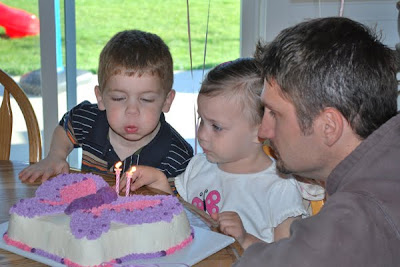 She loved opening presents and everything she got. Keaton did too! Even the dress up shoes! 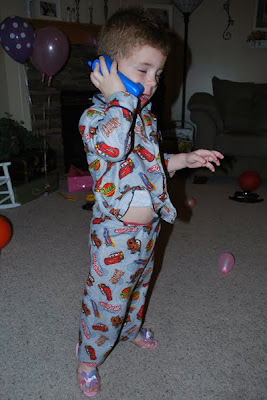 Then last night she got to open her presents from us! She loves opening presents! Keaton was excited too, partly because he knew where they were "hid" so he had been waiting and waiting for her to be able to open them and so he could play with them! 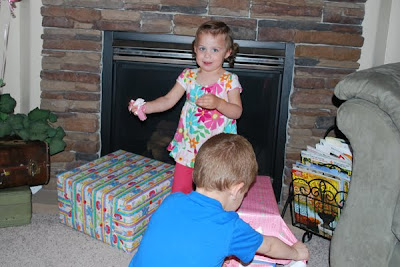 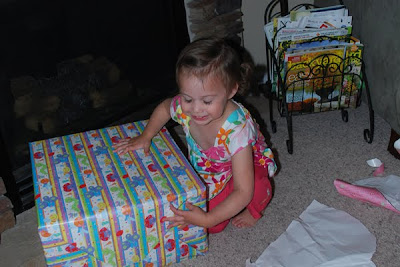 We got her a shopping cart (which she LOVES and will allow no one else to touch) and a Little People set. My parents got her a Little People set also so now they have enough so that they can all play with them. They have played with them for a few hours every day!! She woke up today with a HUGE grin on her face because she knew she got to play with all her new things!
I can't believe she is two... well I can but I can't! She has always been SO grown up for her age not to mention a big girl. She is of course talking in full sentences all the time now, this is nothing new, but definitely ahead of the game for just turning 2. She was 31 lbs 6 ounces which is 95% and 37 3/4 inches tall which of course is 99.9%... or off the charts basically! I have gotten asked quite a few times lately if Tiana and Keaton are twins, they just can't believe that she wasn't even 2 yet! Her latest thing is always asking "why" or "what's that". Full of questions and always learning. She is such a little mommy, she loves taking care of her baby dolls, bossing around her brothers and basically helping keep this house running right! She is starting to get picky about what she wears which will make things interesting around here! She is also QUITE stubborn, it often takes up to 5 minutes in time-out before she will say she is sorry for something! There is no sense in even talking to her before she has stopped being hysterical because it doesn't help. She cools herself down and then will say sorry and want big hugs. Kisses are a cure all but lately you can tell how bad the owie is by how many kisses it requires! She will say "another one" "ok one, more" and so on until she declares it "all better". We seem to have her allergies under control now which has been wonderful. When she does cough though she makes sure to announce "don't worry, I'm ok". When she needs a drink I hear, "fake cough, fake cough, groan...... need a drink, that would make it better!". She really is quite the drama queen!

What a perfect cake for a little girl! Love the cupcakes-very cute!