I sure hope this beautiful weather sticks around now! After running errands we stopped by a park this afternoon before going home. We all have colds.... AGAIN.... so it was nice to have some happy kid time. Nothing quite like a warm sunny day with play equipment to cheer up some grumpy kids. I didn't even bring my camera because I was sure they wouldn't be awake and happy enough to stop. My cell phone worked alright though. 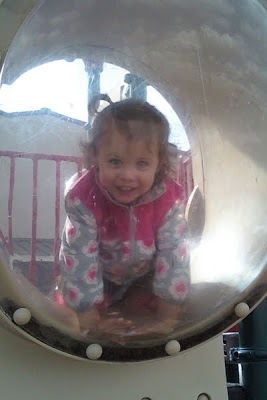 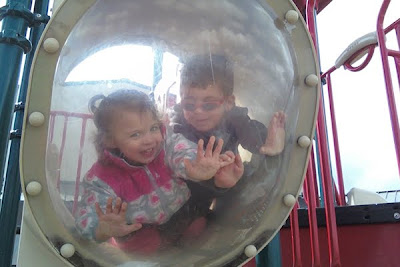 Keaton found these glasses today... they are WAY too small but there is NO convincing him of that. He wore them all day, inside and out! We were walking through Costco and he said, "Why it's dark in here?". Hmmmm, couldn't be the glasses. When I tried to explain to him that we don't wear sunglasses inside he wouldn't even hear it because Mommy does. I have transitions and there is no convincing Keaton that it is different. All the way to meeting tonight he wore them, even though it was dark outside! He also decided that he had to keep his mouth open the entire way. Scared Daddy to death when he glanced back and saw his mouth wide open (mind you, we couldn't tell what his eyes were doing). Daddy stopped the van hopped out to make sure he was ok and he said (with his mouth open the entire time) "I fine, I just have to have my mouth open the whole way". Not sure where he got that idea but it was quite funny. Of course being parents we had to do everything we could to see if we could get him to close his mouth! With no success, not that we had a chance, we were going up against a three year old! 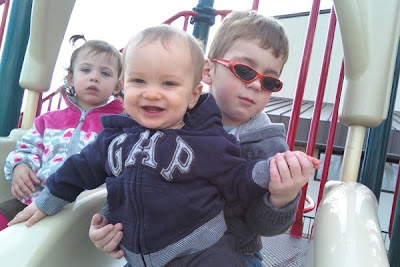 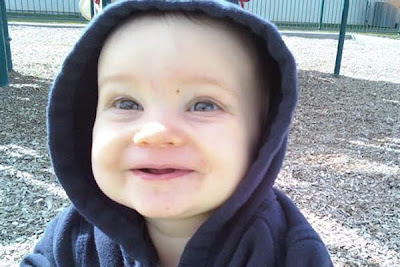 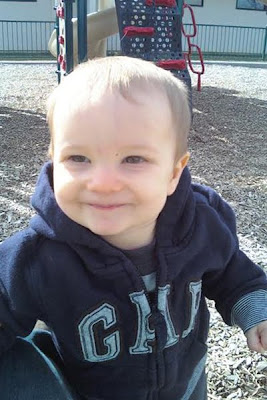 Camden loves being outside. He discovered that dirt doesn't taste too bad either. 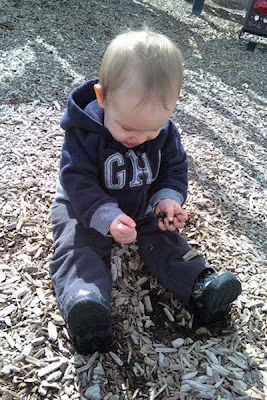 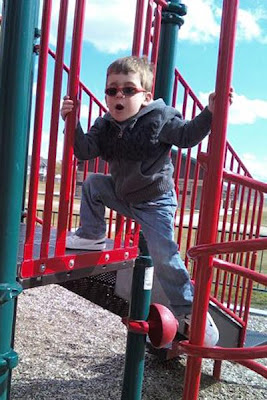 Camden has a little problem, as soon as we put him in the bathtub (about a quarter of the time) he poops. Therefore, Tiana FREAKS OUT. I am talking standing up on one foot (changing feet every few seconds) while hollering at the top of her lungs! Granted it is gross, we aren't disputing that! But she has taken it to the extreme, for a while after this happened a couple times in a row she refused to even get IN the tub. After some coaxing, distracting, bribing, and screaming we got her settled back into the routine. BUT, there better not be so much as one SPECK of toe jam in there or up she goes, standing on one foot, and she is done!!! Today while getting in the bath she gave Camden quite the lecture. "Canden, NO pooping in bath. No no Canden. No poop." She then assured Keaton, "Keaton, get in, no poop. Is ok".
The word that I am ALWAYS hearing from Keaton is "why". I understand that this is an important part of their development, but SERIOUSLY I am getting SO tired of hearing it! In meeting tonight he leans over and tells me that he swallowed his gum. I just whispered a quick little lecture of how we aren't supposed to do that. About 5 minutes later he looked at me and asked where his gum was. I reminded him that he swallowed it. He looks up at me and goes "why?". Don't think I will even ATTEMPT to answer this one. This is is the exact reason I am getting tired of his "whys"!
And not to be left out, Camden has a new little noise too. He loves making an "aaaaaaaa" noise and putting his hand over his mouth.... just like a little Indian! He tried this in meeting tonight quite a few times, even through the pacifier!