Some news and some crafting

We had Keaton's MRI on Tuesday... talk about an ordeal with a little one!  They had to put him under which made me a bit nervous but I was also relieved to think that he wouldn't be laying in there scared.  We had to wait over an hour past appointment time for the MRI machine which didn't go over real well for Keaton!  He kept telling us that we were boring! He did great taking deep breaths to go under but the image that I can't get out of my head was him twitching and flailing about before he relaxed.  Of course they told me this was normal but it still was nerve wracking to watch.  They had told us and him before they took him back that Mommy and Daddy would be there when he woke up!  Well he woke up before they came and got us.  A confused alone 5 year old in strange room with an IV in... when we walked in to him really upset and crying it just broke my heart!  I am so glad that we are DONE with appointments... yes... we got results and all is well!  HUGE sigh of relief!  One really funny thing that happened is while he was recovering we were told that he had a little accident while under so they took his underwear off.  We talked to him about it and explained that we would get some as soon as we got home!  Well we forgot about it so quite a few hours after we got home I said "Oh yeah, Keaton you still aren't wearing any underwear!".  He looked at me like I was CRAZY and argued that he put on underwear... I told him to look... he pulled out his pants and said "Huh, that's weird" (he was VERY confused but laughing).  About a half hour later he came up to me and said "Where did my underwear go? WHO took them off!?!?!".  Apparently he doesn't remember the conversation in recovery and couldn't figure out how his underwear had disappeared!
Now on a crafty note:
We just got our Silhouette Cameo in this week!  The Silhouette is like a printer only with a blade so it will cut out paper, fabric, vinyl, etc.  We got it on the Black Friday deal which was awesome!  I have been dreaming of having one for a long time but a while back my wonderful hubby mentioned wanting one for his fly tying business (he can cut out the boxes he used to ship his flies in)... well of course I didn't need any convincing!!  We have been waiting for the new version to come out and a good deal to happen!  Well it happened and we got it!  LOVE LOVE LOVE IT!  I am sure you will be seeing LOTS of projects done with it.
I had a few t-shirts that I picked up really really cheap at Old Navy at the end of the season last year.  This first shirt applique was made with Iron on Vinyl... talk about easy!  The Silhouette cuts out the aviator sunglasses and all I have to do is iron it on! 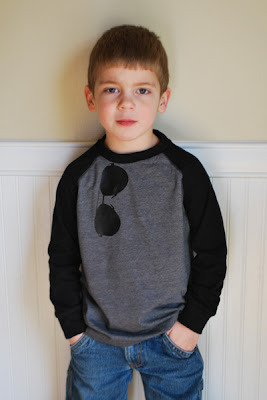 This next one isn't a Silhouette project but I finished another MODKID Maya dress for Tiana.  This time I made it into a shirt and a skirt so that she can get more wear out of it since she can wear the skirt this summer.  She really does love it... however... by the time I took photos she didn't want anything to do with them.  Hence the no faces in the photos!  She was glaring at me something fierce!!
﻿
﻿ 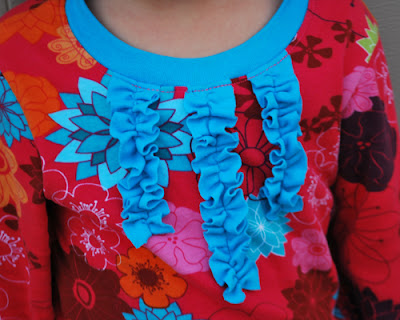 This shirt is another one from Old Navy.  This time I had Keaton go through some options and pick what he wanted on it... he fell in love with the fox and so did I!  This one I put double sided fusible interfacing on knit fabric and let the Silhouette do it's job!!!  It cut it all out and I just layered it on and ironed.  Easy Easy and oh so cute!  On a side note all the knit that I needed was found in the knit t-shirt pile I have rescued from the goodwill pile.  SO nice to finally get some of those cut into.  I love being able to sit down and have an entire selection of knit colors to choose from. 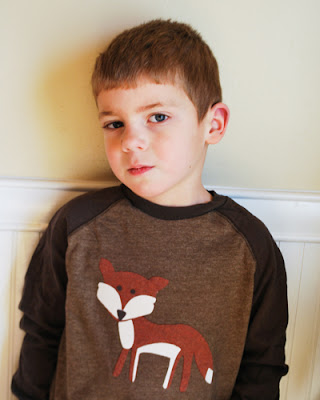 Ohh fun!! I've been looking at those Sillouette machines as well, there's one on my Xmas list - so I'm hoping!!